Milk Thistle 101: A Guide to the Benefits 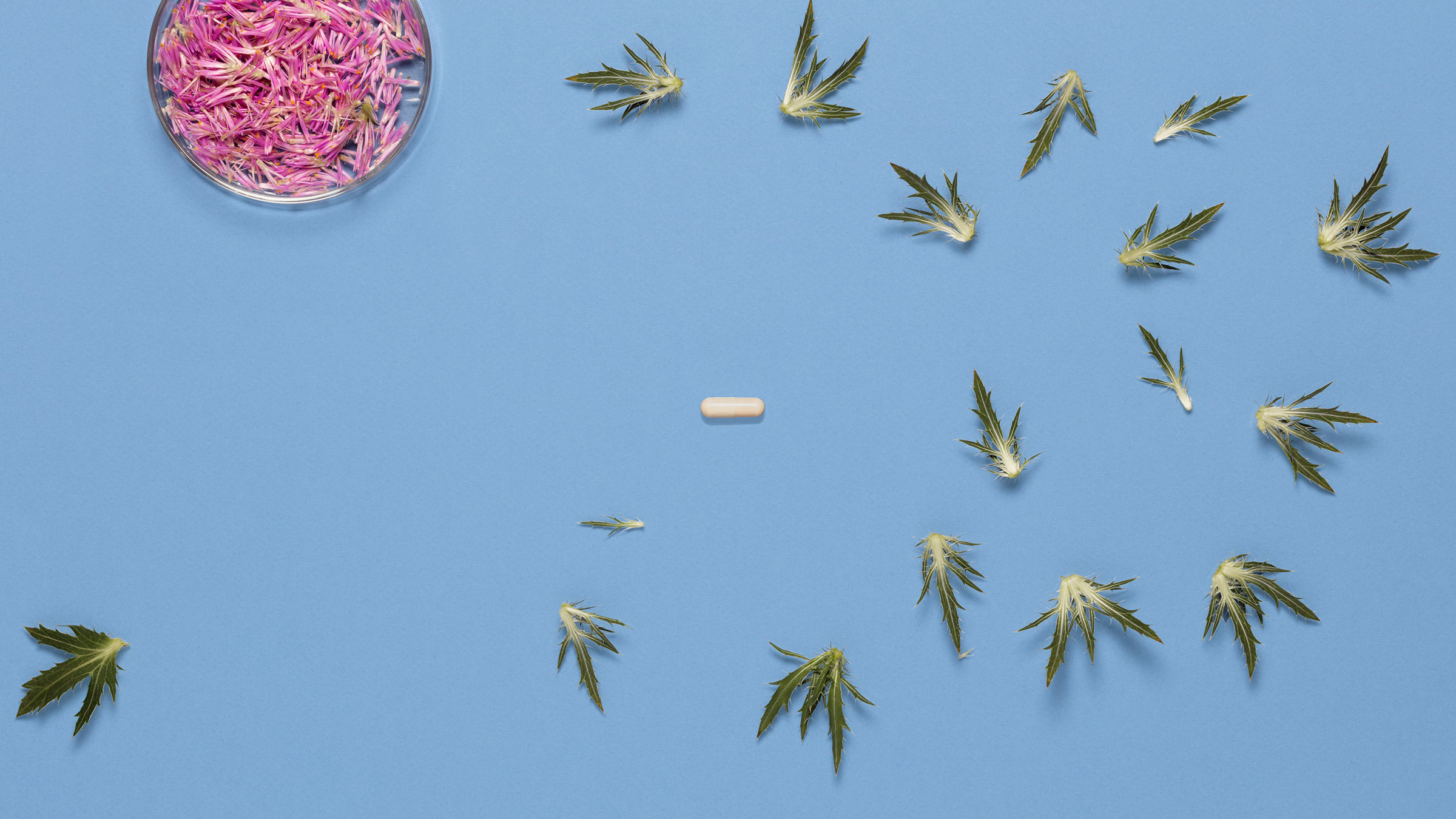 For more than 2,000 years, milk thistle has been used as a therapeutic herb in traditional wellness practices.

If you're like most people, you've probably seen milk thistle tea somewhere in the health aisle, and have an idea it's good for your liver.

But did you know that the plant has been used to support liver health for over 2,000 years? (After all, humans have been drinking wine since at least 6000 BC)

What is milk thistle?

Milk thistle is a plant, native to southern Europe and Asia, but today can be found all over the world. It is also known as Saint Mary’s thistle, holy thistle, and blessed thistle.

Apart from its famously milk white sap, the plant is also recognizable by its bright purple flowers and pale green leaves.

Milk thistle thrives in dry and rocky soils, but has a preference for sunny or lightly shaded areas. The flowers are prickly to the touch, and each flower can produce 200 seeds.

As an edible plant, milk thistle stalks, leaves, roots, and flowers can be eaten. The root can be eaten raw or cooked, and the same applies to the leaves. Because the leaves are sharp, it is recommended that the leaf-spines are first removed. Some people even consider milk thistle an excellent substitute for spinach due to its taste and texture.

Milk thistle seeds can also be roasted and prepared the same way coffee beans are processed, and of course the leaves can be prepared as a tea.

What is the history of milk thistle?

Milk thistle has been consistently recommended by physicians throughout history.

In Ancient Greece, the physician and botanist Dioscorides was the first to describe the therapeutic properties of milk thistle. In addition, English herbalist Nicholas Culpeper first noted that milk thistle supported normal functioning of the liver.

What can milk thistle do for you?

Although milk thistle has been used for thousands of years as a health agent, it wasn’t until the 1960s that European clinical studies began examining it for modern-day health and wellness purposes.

Silymarin is the most powerful flavonoid in milk thistle. Known as a hepatoprotective, silymarin protects the liver against oxidative stress with its antioxidant properties. One of the many antioxidants present in milk thistle belongs to a group called flavonoids. Flavonoids are also one of the main constituents in fruits and vegetables that make them good for you and nourish the body with antioxidants.

Milk thistle is also being explored by researchers for its potential to support liver function when exposed to oxidative stress, certain medications, and ethanol. Studies suggest that silymarin may increase the presence of enzymes superoxide dismutase while silybin can act as an iron chelator which enhances the antioxidant effects associated with milk thistle.

Milk thistle has been used for centuries as a liver and gallbladder tonic. The liver is the body‘s largest internal organ and is responsible for detoxifying the body. It is involved in more than 500 biological functions, including filtering blood from the digestive tract before sending it to the rest of the body. In short, the liver plays a key role in overseeing the metabolic processes of the body by detoxifying, cleansing, synthesizing constituents, and producing bile to aid digestion.

According to this study, silymarin (an extract from milk thistle seeds) may increase glutathione levels. Glutathione is a powerful antioxidant made up of three amino acids: glutamine, glycine and cysteine. Glutathione is also known as the “ultimate antioxidant” helping to scavenge free radicals and oxidative stress from the body.

Our modern-day lifestyle can be overwhelming to the liver. The body is constantly bombarded with pollutants from the environment, compromised air and water quality, exhaust fumes, and so much more. The environmental stressors can also contribute to the oxidative stress the body is exposed to. This study reported a correlation between oxidative stress and weight gain. They measured 4 metabolites associated with oxidative stress and independently related to weight gain. Although they have not tested milk thistle and how it can impact those metabolites it may be an interesting area to explore for future research due to the antioxidant properties of milk thistle.

On its own, milk thistle is not likely to make a difference with weight management. The best habits to work on include maintaining a healthy nutrient dense diet, proper hydration, adequate sleep, and consistent exercise to support weight management.

Milk thistle for the brain

Based on the antioxidant properties of milk thistle, it may have potential benefits for promoting brain health. Although studies have not been done on humans just yet, there was a recent animal study exploring the effects of silymarin on neurotransmitters. Over a period of 5 days the mice in the study were treated with varying amounts of silymarin. After analyzing the data, results suggest that silymarin may positively affect serotonin levels in the brain while also managing dopamine and norepinephrine levels. Additional research needs to be done to see if the same effects are observed in humans.

Most people think of calcium and Vitamin D when they think about optimal support for bone health. Surprisingly, milk thistle has been studied to explore its potential relationship to bone health.

Bone health is managed by so many factors including hormones, essential nutrients, and lifestyle factors like diet and exercise. Bone metabolism is managed by two specialized cell types called osteoblasts and osteoclasts. Osteoblasts are known to help build bones while osteoclasts help with bone resorption. This study demonstrated that milk thistle can promote bone health in postmenopausal women by inhibiting osteoclasts.

Acne occurs due to a variety of reasons from hormonal changes, increase in stress levels, poor diet, and so much more. Acne is common and most people have experienced it at least once in their lifetime. Now milk thistle isn’t a one stop shop for all skin care concerns however thanks to its antioxidant properties it has potential to support your skin. One of milk thistle’s major antioxidants called silymarin helps fight free radicals and oxidative stress which both contribute to the early acne formation process.

This study reported that milk thistle extract can also protect the skin against oxidative stress from UV exposure. Although this initial study has only been done on animal models, the results are promising. Due to the numerous beneficial properties of milk thistle, you may even see it used as an ingredient in future skin care products.

Which milk thistle should I take?

Finding the most potent and pure milk thistle on the market today can be a challenge. With transparency about where herbs are sourced, you should look for the highest potency supplement that is non-GMO, organic, and free from unnecessary fillers.

Look for milk thistle that is produced using a gentle extraction method that avoids commonly used harsh solvents - eliminating the use of chemicals that are harmful to the environment and people.

How do I take milk thistle?

Does milk thistle have side effects?

The National Center for Complementary and Integrative Health notes the following about milk thistle side effects:

Other potential side effects of silymarin or milk thistle may include nausea, change in bowel movements, loss of appetite, or skin changes.

How much milk thistle should I take?

Milk thistle is generally considered safe as a supplement. Toxic effects of milk thistle have not been noted at dosages up to 2100 mg per day over a 6 month time frame. Always speak to a physician about taking a new herbal supplement, especially if you have concerns about dosage.

The Best Protein Powder for Weight Loss in 2023

Can Vitamin B12 Really Help You With Weight Loss and Management?